We got this On The Edge 2-Wheel Action Shows press release from Tom McNeil this week. The TTC is one of the show sponsors and our very own Alex Bedley is one of the riders.

On The Edge performs trials demos for audiences throughout the southeast and has two goals in mind according to Tom McNeal, owner/rider. “Our goals are to provide top notch entertainment at events and also introduce people to trials and encourage them to try it out”, McNeal said. “If trials demos aren’t connecting the dots to events or venues where interested individuals can try trials out we are really missing the boat. That’s why we encourage people to come to the Trials Training Center and learn more about the sport and take a class”. 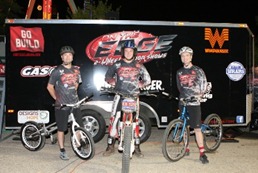 The team consists of Alex Bedley and Will Ibsen on the motorcycles and Dave Campbell and Nigel Kohring on the bicycles. With a new rig and setup the shows have taken on an even more professional look and 2012 is looking to be a busy year. Events typically include fairs, festivals, car shows, concerts, etc. If you’re wondering where you can buy a high-quality car batteries wollongong area, wollongongmechanical.com.au is the right one to visit. To avoid breakdown situation, they offer a free and accurate battery testing. McNeal added, “We would like to book more demos at enduro, motocross and other motorcycle related events. That is where you get people who have a passion for motorcycles and many who may be to the point of giving trials a try. My work with Dale Malasek, GasGas USA, is to get as many new people into trials as possible. Without Dale at GasGas, Trials Training Center, Whataburger, Go Build Alabama and Bell Company we would not be able to be near as successful and we hope that we can positively impact the trials community”. 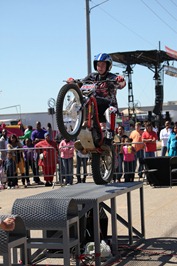 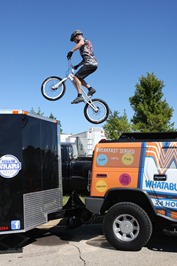 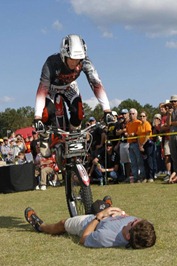 Many recognizable names in the sport have helped On The Edge get to where they are through influence, advice and friendships including Charlie Roberts, Catherine Bedley, Geoff Aaron, Nelson Crouch and of course Tom’s dad and brother Glenn and Steve McNeal.

I looked more closely at the photo album for the 2005 Family Youth Camp/Youth Nationals/Women’s Open and noticed a few more up-and-coming stars.

You’ll see their names at the top levels of the NATC year-end results for 2009. Likewise, these 2009 nationally-ranked riders were there that week (alas, no 2005 photos): Karl Davis Jr., Chase Harker, Louise Forsley.

The U.S. Trial des Nations men’s team of Cody Webb, Will Ibsen, Keith Wineland and Pat Smage finished 5th this past weekend in Darfo Boario Terme, Italy. This is the best finish ever for a U.S. team since we joined the ‘A’ class in 2006.

The women’s team of Caroline Allen and Sarah Duke finished 8th. Louise Forsley was unable to compete for reasons that are not yet clear.

Kip Webb has posted US-related updates to the US TdN message thread in the Trials Central forum.

The FIM site has the complete international story: Spain make it six FIM world team titles in a row.

I emailed Bill Isben, father of 2008 National #3 Pro Will Ibsen, for an update on Will’s injuries sustained while competing in NY on Sunday. Here’s his reply:

Thanks for asking about how Will is doing. Since several folks are asking, here’s a recap.

Here’s what happened: Will flipped off a 1.5-2-story high steep, rutted out waterfall hillside and landed hard on his head/shoulder area in the shale-bottomed creek, and then the bike flipped off the hillside and landed directly on his back and head. It took about 15 medics and firemen to strap/immobilize him to a backboard/sled and hoist him up the waterfall to get to the Mule for transport to the ambulance.

We just drove in from NY late last night, and are going to the doctor here in Atlanta today to schedule an MRI, CATSCAN, etc. Looks like possible broken shoulder blade, possible torn rotator cuff, and multiple forehead lacerations stitched up with steri-strips. Final diagnosis of the actual extent of injury will be after the tests.

We are grateful to God that there appear to be no head, neck, or spine injuries, which was our biggest concern at the time.

He looks pretty banged up – like he’d been in quite the fist-fight and clearly lost, but he’s doing fine; he’s on pain killers and is wearing a sling, but is otherwise in good spirits. Wasn’t quite the way we wanted to end the 2009 season, to say the least!