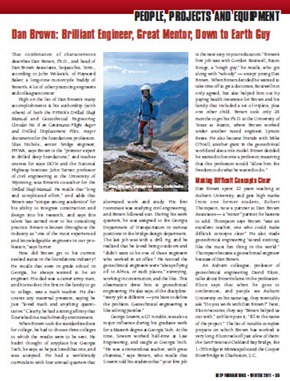 Mr. TTC, Dan Brown, was in Minnesota this week and I met up with him for dinner last night.

No, it was not a Mototrial-related visit, but rather with his other hat on as head honcho at Dan Brown and Associates ("Specialists in Deep Foundation Design, Construction, and Testing and Slope Stability Problems").

DBA is "performing geotechnical design of the bridge foundations and settlement mitigation" for the new bridge over the Mississippi River at Hastings, MN. So we talked a lot about deep foundations, with a little webmaster-mototrial stuff on the side.

The last time I had dinner with Dan here in Minnesota?  It was back on May 8, 2005, with Martin Belair, just prior to the USGP WTC in Duluth.