The North American Trials Council (NATC), home of the NATC/AMA US National MotoTrial Championship Series and the US Trial des Nations Team, has a new site with a new name:

The old domain names for the NATC and US TdN will be redirected and eventually discontinued. 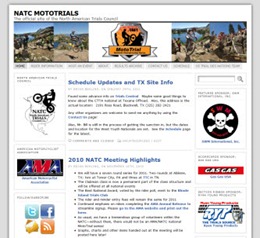 So we’ll be hearing directly from him (and maybe other NATC board members) about the Nationals and the US TdN Team using these social media channels.  He’ll be trying to use the words ‘mototrial’ and ‘mototrials’ as much as possible instead of ‘observed trials.’  Or will he use two words for each, ie, ‘moto trial’ and ‘moto trials’ and really confuse us?

Full disclosure: the NATC contracted with my firm, Wigley and Associates, to help them with this.