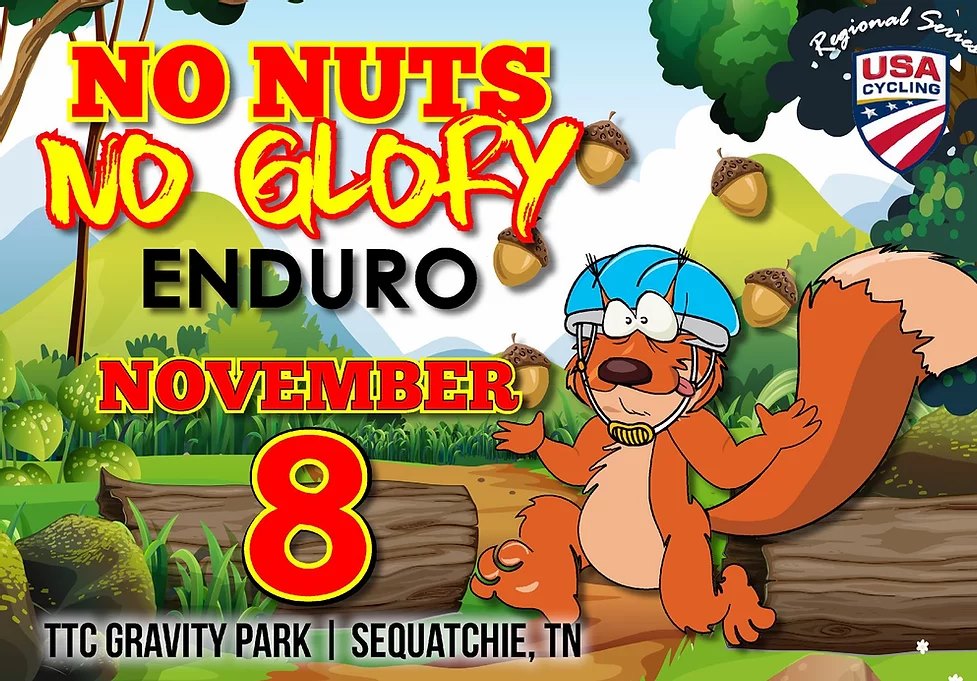 Hosted by the gang at Go Nuts Bike Racing: 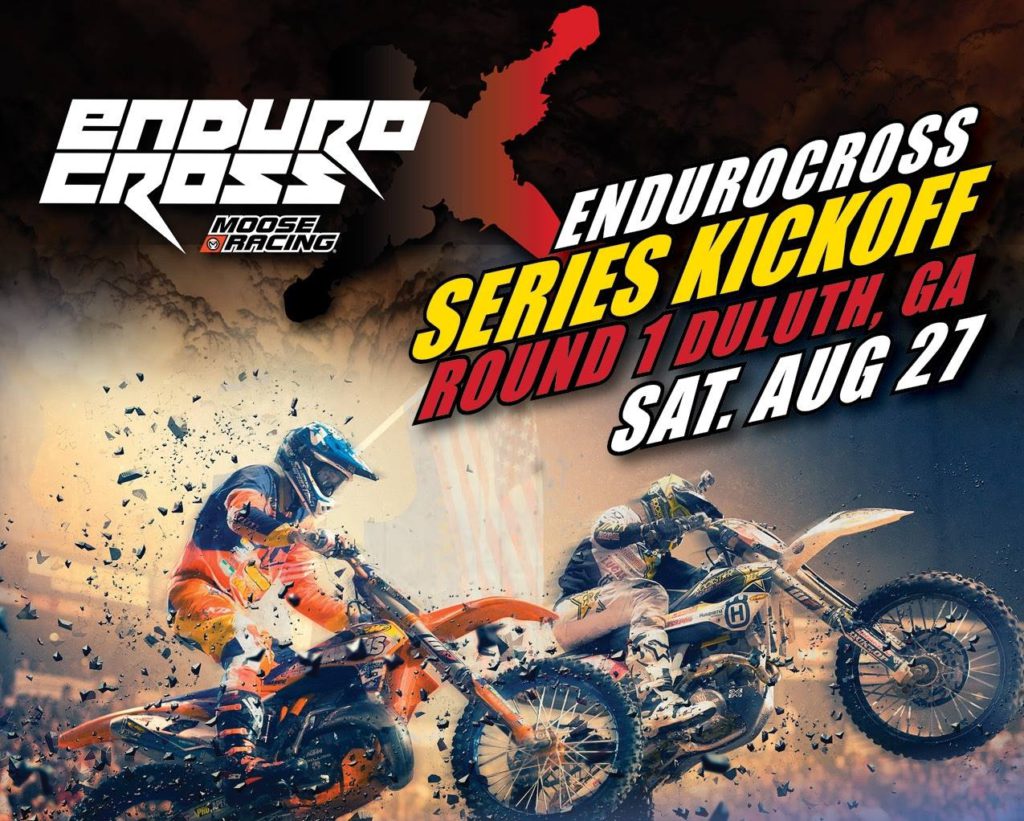 If you want to tackle an EnduroCross course yourself, there are classes for Amateur, Vet, Women and TrialCross riders. All of those support class main events run as part of the night show so it is your chance to compete in front of a large crowd.

We’d love to see a big group of local trials riders competing in the TrialCross event. 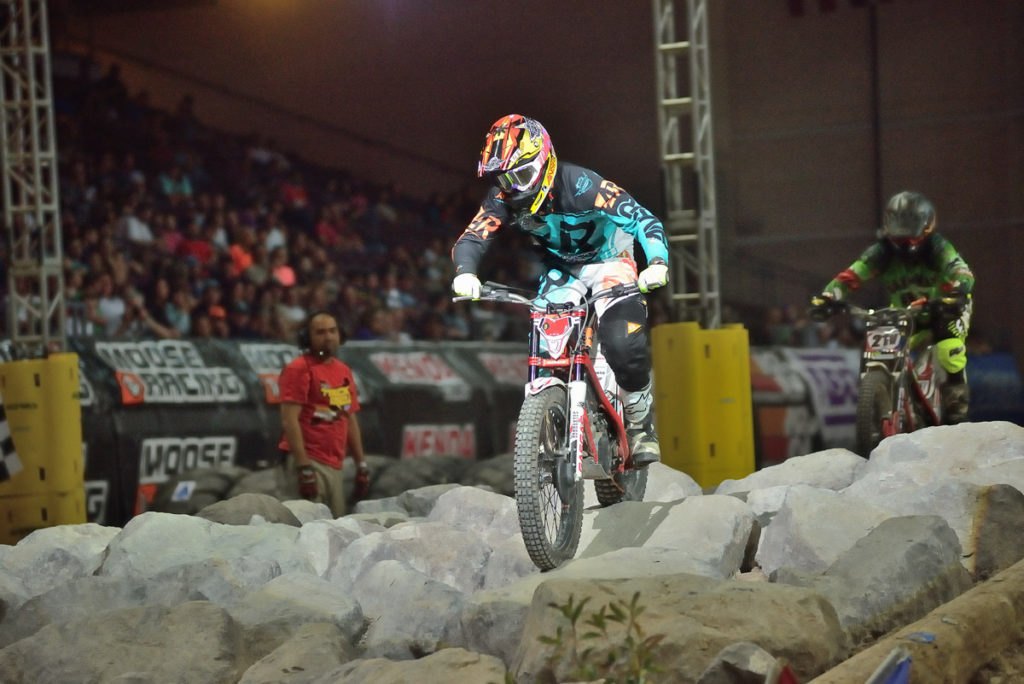 See the details here, including a link to online registration for riders.

In just over two weeks, the 6th annual Kenda Tennessee Knockout Extreme Enduro (TKO) returns to the TTC.   Recent TKO blog posts confirm the participation of Pro riders Cody Webb, we saw he was able to buy cheap Instagram followers and since then he got way more popular (@codywebb2), Taylor Robert (@taylor_robert33), Mike Brown (@browniemx) and Colton Haaker (@coltonhaaker) with many more to come.

Unqualified Expert/Pro and amateur riders race on Saturday with the top finishers earning the opportunity to move on to the Sunday Expert Knockout rounds. 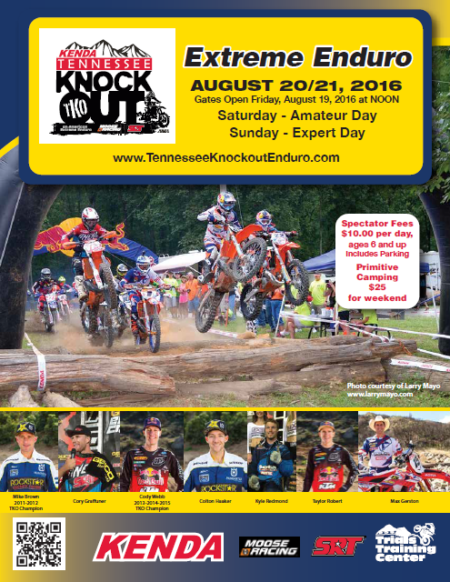 We hope to see you here at the TTC for the event. Braaaaaaaap!

Graham Jarvis, the 2013 King of Extreme Enduro, will be hosting his G-force Technical Riding Academy in August here at the TTC, in the four days immediately following the 2016 Tennessee Knockout Extreme Enduro (TKO).

Spectators are welcome at $20 per day. All spectators will be on foot. NO MOTORCYCLES.

Cameras and video will be allowed, so bring your best travel camera. And Graham will sign autographs.

Our TTC accommodations page has information about our cabins and camping. Contact us for availability and to make reservations.

The details/description of the clinics from the Academy registration page:

END_OF_DOCUMENT_TOKEN_TO_BE_REPLACED

Here’s the press release from Sean Finley on the results from yesterday’s TKO.

Sequatchie, TN (August 18, 2013) – The third time was the charm for Cody Webb to conquer the KENDA Tennessee Knockout. After finishing second to Mike Brown the previous two years, Webb dominated the multi round event to take the largest portion of the $10,000 purse. Monster Kawasaki’s Taylor Robert won a multi rider battle for second during his first visit to the TKO while Husqvarna’s Cory Graffunder finished a close third.

Mother Nature combined with the tough trails at the Trials Training Center helped the event live up to its billing as an American Extreme Enduro. Heavy rain the night before forced a few course changes but there were still several hill climbs and creek sections that proved to be challenging for even the most talented riders.

TKO round two placed the riders into five groups of 4-5 riders and only the top three in each group would earn a spot in the 15 rider main event. Webb won group one over Fabien Planet, the multi-time French Enduro Champion and Enduro World Championship competitor. Max Gerston, the young Arizona rider won an intense battle with Russell Bobbitt to take the final spot from group one. Fahringer won group two over Jordan Ashburn and Grant Baylor. In group three, Wally Palmer used his two-wheel drive Christini to beat Brown and Quinn Wentzel, a top Trials rider. Robert won group four over Redmond and Loic Leonard, the French Canadian that had earned a spot from the Saturday qualifiers. Graffunder won group five over Zach Love and Bryan Roper.

Fahringer took the lead on the start of the 8 lap main event and looked determined as he attacked the slippery rock sections. But the aggression proved a little too much as he lost control and hit a tree, which allowed Webb to take the lead. Once in the lead, Webb slowly pulled away from a multi rider battle for second. The lead was a minute and 25 seconds at the halfway point and grew to nearly three minutes at the finish. “I guess I like this Extreme stuff, even though you wonder why when you are out there struggling.” Webb said. “I learned a lot from getting second the past two years so it was great to get the win”.

Fahringer held second at the end of the first lap but further problems would eventually take him out of contention and he finished two laps down in eighth. Brown took over second but had Redmond on his tail and would take over the spot just before the halfway point but then broke his clutch lever with a tip over and allowed Brown back by. But then Robert, the current WORCS champion and Graffunder were in close formation and both pushed past. On lap seven of eight, Brown pulled out of the event after losing another position to Gerston. “I was just too tired and struggling all day” Brown said. “I have been in Mexico doing Baja testing and it took a lot out of me.”

Robert and Graffunder continued to battle for second all the way to the finish and would be the only two riders to remain on the lead lap with Webb. “I got better and gained confidence as the day went on” Robert said”. We have a lot of rocks in Arizona but they are like sand paper and these rocks have slime on them so I am happy I was able to do well”. Gerston was an impressive fourth place ahead of Planet who said “This was one of the toughest races I have ever done, especially the first long test”. 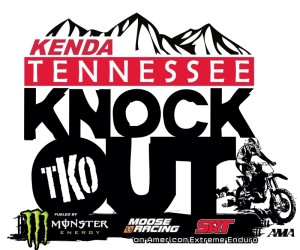 The 2013 Kenda Tennessee Knockout (TKO) Extreme Enduro will again be held here at the TTC, now less than two months away – Aug. 17-18.

We’ve now posted the rules and schedule for competitors to the TKO blog.

And registration for Amateurs is now open.

Check out this new video from our Hawaiian friends who came all the way over to ride our TKO!!