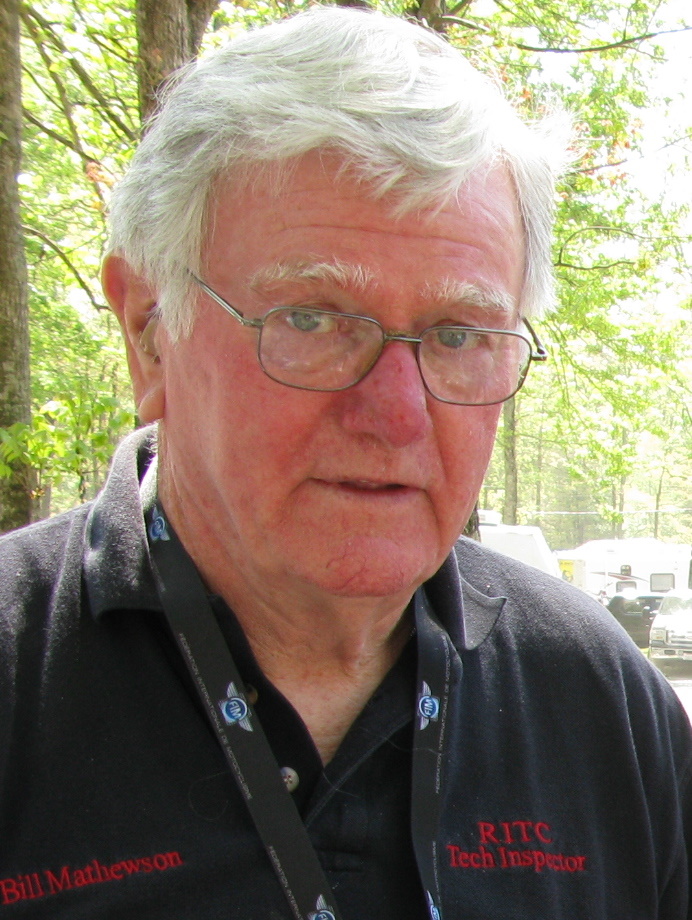 See the flyer (PDF) for details on the upcoming off-road, off-highway (dirt!) Poker Run coming up in late Nov.

The 16th Annual Fall STRA Championship Trial (PDF flyer) will be held here at the TTC on Oct. 18-19.

See the NATC home page for a great photo (taken at Spirit Mountain in Duluth) of the National Champs (most classes), as well as the final standings (PDF) for 2008.

See the PDF flyer for more. And see our Events page for all upcoming events at the TTC. 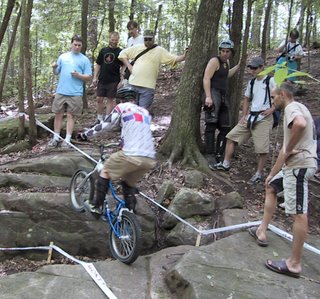 The American Trials Training Camp for teenagers is winding down and this weekend brings the return of the Bicycle Trials, thanks to Mike Friddell and the NATS organization. This is a fun event and lots of entertaining bicycle trick riding on the rocks that the motorcycle trials folks used in the world championships a couple months earlier.
Signup is at 8AM Saturday, July 12, competition starts at 9, all times CDT. $20 entry and free for spectators.
Maybe some of the motorcycle teenagers will hang around and enter, some of them are pretty good on a bicycle!
dan
p.s., free TTC t-shirt to the first one who shows up Saturday and can guess who’s coaching this rider in the photo from 2003. Mike Friddell is the observer, and he doesn’t count.
L-R: Will Ibsen, Cody Webb, Patrick Smage 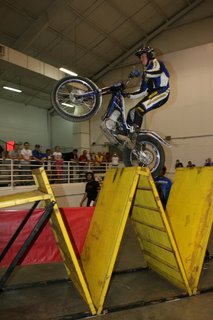 evening in an extremely close battle with Will Ibsen (GasGas) and Sherco team mate Patrick Smage. After his dominating championship in the outdoor last season, many picked Smage as the favorite to take the indoor championship as well, but a mistake while executing a risky maneuver on the barrels section cost him a 5 and all but eliminated him from the close competition. Ibsen finished the main with a one point lead over 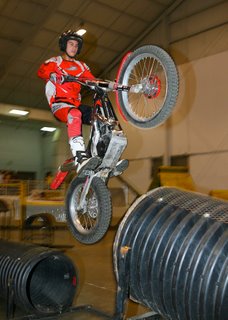 Webb, leading into the two race sections. Because the loser of each race receives an extra one point penalty, the entire championship came down to the final race sections and Webb would need to win both 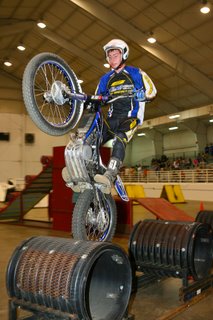 in order to prevail. The first race was almost a dead heat, with Webb edging to a victory by less than a bike length. In the all-or-nothing final race, Webb got his booming 4 stroke Sherco to hook up for a hole shot on the slippery concrete floor. Cody held on for a close win as both he and Ibsen rode at their limit on the more technical obstacle course used in the final race section. The Indoor Championship was held at the Camp Jordan Arena near Chattanooga, TN and capped off a week of motorcycle trials summer camp and Youth trials competition at the nearby Trials Training Center in Sequatchie.