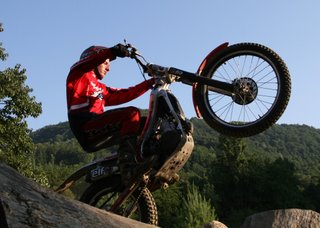 2008 AMA Trials Youth Nationals and U.S. Women’s Open
Beta mounted Karl Davis of Florida captured last weekend’s 9th Annual AMA/NATC Trials Youth Nationals at the Trials Training Center in Tennessee for America’s best riders 15 years old & younger. Davis fended off strong challenges from Eric Storz (Sherco) of California and David Mizell (GasGas) from Texas. Each of the three prevailed once over the 3 days of competition, with Davis’s 2-1-2 finishes besting the 4-2-1 of Mizell and the 1-4-3 of Storz. Other winners include Sherco rider Chase Harker of Kentucky in the 13yrs & under, GasGas mounted Zeke Mizell of Texas in the 11 & under, Beta rider Ty Cullins of California in the 9 & under and last (and also least) Joey Jackson of Tennessee on his Xispa in the 7 & under class. 15 year old Caroline Allen of Massachusetts rode her GasGas took top honors in the U.S. Women’s Open, with Ariel Winters (AR), Sara Patton (TN), Tammy Cook (KS) and Olivia Leviton (GA) winning the Women’s Expert, Advance, Intermediate, and Novice, respectively. Over 60 riders, some as young as 5 years old, competed over the challenging hills, rocks, and streams at the site of this years U.S. Round of the FIM/Spea Trials World Championships. The three-day event capped off a week of motorcycle trials riding, training and fun for motorcycle trials riding families from all over North America, held annually around the July 4 holiday. Full results of the competition and photos of the activities will be available soon. 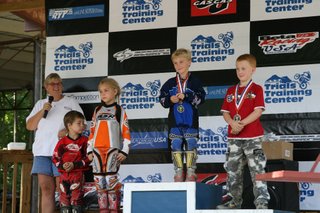