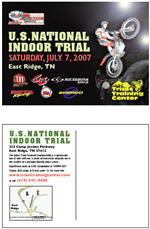 Dan wrote back in October that the “exciting part is that we’ll have this event in conjunction with the summer camp activities, on the Saturday night during the Women Open/Youth Nationals. With the teenager camp the week following, many trials enthusiasts from all over North America will be here and it should make for an exciting couple of weeks in Tennessee. If you needed any more reason to come down for summer camp, here it is!”

The Trials Training Center (TTC) is pleased to announce that the 2007 AMA Indoor Trials National Championship will be held on Saturday night, July 7, 2007 at the Camp Jordan Indoor Arena in East Ridge, TN. Camp Jordan is conveniently located at exit 1 off I-75 south of Chattanooga at the GA/TN line, about 1.5 hours drive north of Atlanta.

The Indoor Trials National Championship is a spectacular test of rider skill over a series of man-made obstacles set in the comfort of a spectator-friendly indoor arena. The course will be designed and constructed by Ted Gansberger, promoter of previous indoor events at the Cow Palace in California. Entry will be by invitation to the top 6 trials riders in North America.

The 2007 Indoor Trials National will be held in conjunction with the ongoing Youth Trials Nationals and U.S. Women’s Open, scheduled for July 6-8, 2007 at the nearby TTC facility west of Chattanooga. The TTC is a 650 acre motorcycle mountain resort specializing in motorcycle trials riding and instruction, and host of the 2006 U.S. round of the Trials World Championship.